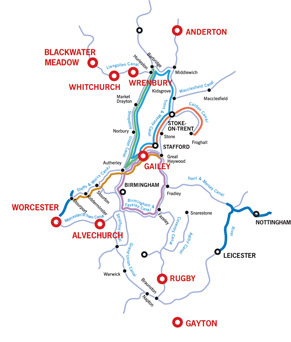 The Potteries is famous for its pottery heritage and the reason the Trent & Mersey canal was built is due to Josiah Wedgewood requiring a better way to transport his goods and was the main benefactor in the canals construction. The Trent and Mersey Canal is host to the engineering feats of Heartbreak Hill, The Harecastle Tunnel as well as the Anderton Boat Lift.

The Caldon Canal branches off from the Trent and Mersey and the area which is also known as Little Switzerland runs for 18 miles from Stoke to Froghall on the edge of the Peak District.

The Black Country has more miles of canal than Venice and during industrial revolution the canal system was developed to serve the steel , coal, lime and glass industries. Today most of the heavy industry has disappeared, but many of the canals remain and transport you through a combination of rural and urban areas.